What is a Murder Mystery Event?

A Moneypenny Murder Mystery Event is ideal entertainment for any group of guests between 10 and 110 looking to be thrilled. It's a unique blend of live theatre and audience interaction with the emphasis on FUN! With actors as Suspects and the audience as teams of Detectives, Moneypenny Murder Mystery Productions ​ produce an evening of compulsive entertainment at a price as cut-throat as the performance.

Every Moneypenny Murder Mystery Event comes complete with a costumed cast, digital sound, complete event liability cover, props and an original crime. The event involves all of your guests as teams of Detectives. They must attempt to solve a deadly who-dun it by answering three simple questions: WHO committed the crime, HOW and WHY? Our events are ideally accompanied by a meal and begin with the audience witnessing scripted scenes featuring events that took place in the run-up to the ghastly crime! Your guests will meet each of the Suspects who join them at their tables to be interrogated. "Have you ever had an affair?" "How much money do you have?" "Have you ever been blackmailed?" These are the questions we get asked the most - and who wouldn't want to ask other people them? It's the best excuse for being nosey and getting away with it you'll ever have.

With forensic evidence, police files and more performed scenes you'll quickly find yourself engaged in an interactive mystery that you'll be falling over yourself to solve. Each event concludes with a flash-back portrayal of the actual murder taking place and the announcement of the winning team of guests. A perfect mix of competition, pace and light-hearted hilarity.

The winners at the end of the evening are the team that correctly solve the crime by finding the Murderer, Weapon and Motive. An event usually runs at 2 1/2 hours. Moneypenny Murder Mystery Productions do have strong teambuilding elements included however, the emphasis is always on fun and entertainment. Events always include their own suspects and victim but if you would like audience members written into the plot we are masters of implication and association! 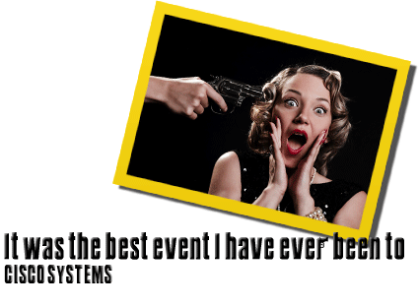